Foodblog no longer on hiatus. I know it has been like...18 days since my last post. BUT VOILA!! I have returned. (Sort of). I'm severely sleep deprived, rather stressed, and been prodded with all sorts of crazy combative encounters (supershuttle, JetBlue, TSA employees, regular ol' people..YARGH!!). Trust me though I've been eating--just...wait for it. It takes a lot out of me to do pictures and post, oddly enough. Lots and lots of love goes into it ;) I meant to do a giant review of all the British candies I ate while working abroad last summer...and there's a draft of it somewhere but I felt like Flake needed its own post--mostly b/c I like the pictures better, and u can bite my sh*ny metal @$$. The product was first developed in 1920 and was founded by an employee of Cadburys. When the excess from the moulds was drained off, it fell off in a stream and created folded chocolate with flaking properties. [1]

When we were chillin' at the Tate Modern lawn, Albee bought a "99p" or whatever it was called (I swear b/c it cost 99pence but anyway), which consisted of soft serve in cone with a giant Flake jammed in the middle. Violent, graceful...*shrug*. Do you enjoy the sexy side to flake and ice cream? Other people obviously agree with me. That one's borrowed from flickr (@ brighton beach courtesy of Ben Lawson's photostream.

I miss my natural light and my flake in natural light--maybe I'll reshoot soon, but I'm too busy during lunch what with the eating and walking the dog and you know, going back to work and all to really catch the light. Plus it's been dreadfully gloomy and drizzling these past couple days and you depress me. Initially I hated the damn flake. I thought it was disgusting, crumbly, and chalky. Coincidentally, there was an article in the NYTimes about how "the shizz" all the British chocolates were. I LOVE Crunchie. that's for another day. That is all!!! I'm spent!
Posted by obitran at 10:09 PM 3 comments:

I deed not make zees, my roomie Jaime did. FROM SCRATCH. and like...at midnight last night :) brazilliant.

This is for the St. Patty's Day kick-off this weekend. FROM SCRATCH!!!
Recipe from epicurious.com. For the xmas party she made this shrimp spinach dip--or crab...or some kind of shellfish...nummy num num num nummm..... Her cupcakes are badass. She's making them now. I'm a fan of people making food and me eating it. and taking pictures of it. wooooorrrrrrrdddd...... She makes her own frosting, too and this time it's gonna grizzeeeen!--she's got the hostessing/chef gene that my mom's been trying to pound into my veins since I could remember. HA!!

You bet your tush there's much more food on the way. MMmmMmmmMmmMmmmmm...
(there will also be pics of Hans in green. YAY puppy torure!)
Posted by obitran at 10:37 PM No comments:

I like to pick at food. I do well when I pick at things when I need to eat efficiently and maintain productivity and focus. I'm over my whole Nutella with dark german wheat bread with my morning tea (me loves PG Tips breakfast tea). I'll do a post about teas some other time. ANYWAY. I've never been a fan of trail mix type of crap but lemme say--I enjoy the little package of mixed nuts, kashi, and raisins I found in the bodega under me. Seriously badasssss bodega. I had planned on doing a post on all the imported plain jane candies they randomly offer there--like FLAKE! and Hausnutta (yeah tewtally oddball) but ze mood--eet struck me. There was a giant brazil nut in there too I though that was kind of random and weird. The container itself was....$3.50 and methinks that's actually pretty good considering it had pumpkin seeds, sunflower seeds, kashi, giant ass raisins, cashews, balhblabhlabhl. Not salted but well roasted.

Surprisingly nummers. It was the lighting. couldn't resist. we have good window. It was a good lunch (my work is 3 stops away--but alas, we're moving offices uptown >:().
Posted by obitran at 10:14 PM No comments: This pretty much confirms I will take a picture of anything, at anytime, anywhere. OBSESSIVELY. 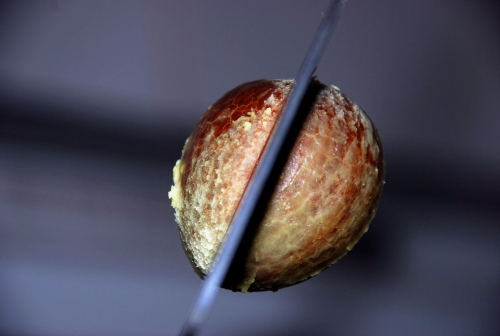 Not too fond of the coloring on this, but the idea is good. oh well =/ 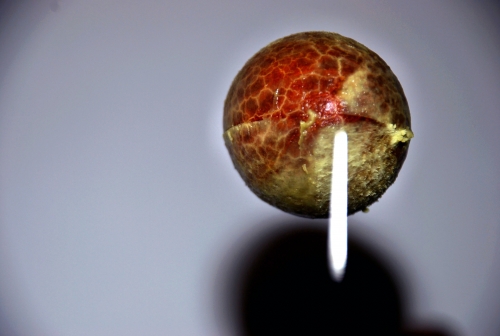 That's all. You may scroll down and read about my Grom-ing.
Posted by obitran at 1:07 AM No comments:

I am an italo-phile. no to the francophile. yes to the...anyhoodlekins.
Had some Grom on the UWS (Broadway b/w 76th & 77th st) w/ Jules-ster--she got the pistachio, I got the crema di grom.

I gotta say--it's a little refreshing, but disorienting to see Pistachio gelato/ice cream not in unearthly green form (see spumoni gardens pics). The pistachio also tasted nutty (as it probably should) and u can really taste the "toasted" side to it. Warm, not too sweet, delish. My crema di grom is egg cream, Battifollo "meliga" biscuits (which evidently just means they made it with corn flour instead of wheat and...Grom's rather prideful about their snootiness in ingredients), and Ecuadorian chocolate. Some other flavors had Venezuelan chocolate--u should read about the crazy chocolate wars b/w Amedei and Valrhona...it's a little inSANE. **

Here's more of my ice cream b/c you love ze peektures. (Btw...a little too pricey for the sizes--what u see there was 5 bucks each.People are getting uber snooty about chocolates particularly the cocoa content, where the beans are from (likened to the origins of ze grapes and regions for ze wine and whatnot) and of course the recent NYtimes article on the emergence of snooty Milk Chocolate. The site 70% (referring to the % of cacao powder blahblahbl) is a good resource to edumacate urself on fancy chocolates (and buy them!). In Italy, it was 3-4 euros for gelato the size of 2 of your fits clinging fervently to a sugar cone. Packed fo yo FACE!!) This one is a little...diminutive ain't it :P

I tried the Marrons de Glaces (good, i can't pinpoint the flavor but possibly red-bean-y or taro-y). The stracciatella is a good vanilla/cream-ish with chocolate and whatnot. Surprisingly they had Hazelnut AND Gianduja--but I gues that makes sense since gianduja is essentially Nutella (hazelnut chocolate) whereas the other one is just singular. I'm not a fan of sorbet so...I didn't try any. The Zabaione i think has the egg cream base like the Crema di Grom but with Sicilian Marsala wine.

I've had a few gelati downtown but I dunno...this does taste a lot cleaner/crisper and while creamy, just not as heavy as most gelati. My favorite was this place in Rome (I can't remember the cross streets but this was possibly near Piazza Navona on the way back from the Vatican near the bridge where that castle is. VAGUE yes? Whatebbs yo). Florence gelati was good but for some reason...that one in Rome always stuck with me. There was a great gelato/coffee shop in the Belmont Shore strip in Long Beach. That you can look up yourself but I think it was called Cafe Roma--dun dun dunnn....

--
**(Valrhona refused to let the Tessieri bro/sis work with them, Tessieri goes straight to make a deal with the chocolate plantation folks in South America to work exclusively for Tessieri's AMADEI!!)
Posted by obitran at 4:46 PM No comments:

According to http://stuffwhitepeoplelike.wordpress.com, one of the few things white people like (along with difficult breakups, renovations, kitchen gadgets, coffee, knowing what's good for poor people, etc., etc.) is expensive sammiches. Is that monetarily speaking? or INGREDIENT speaking?

Other than white folks, I suppose hipsters, foodies (gourmands rather? :P), bougeois people--and general sammiches people alike--just enjoy a little variation in our sammiches. I present to you--my lunch. Simple, cheap, a hodgepodge of flavors: Zomick's Egg Challah roll (I've also really liked the Pepperidge Farm Honey Flax Wheat, and Dark German Wheat breads--I neither have the time or energy to stalk down artisanal breads at a bakery--btw those little rye bread party sized...square things are freakin' awesome), spinach (I usually use arugula), "roast beef" (this one is just Hillshire Farm, it does not look like roast beef, it looks like processed beef that was probably roasted....also interchangeable with shaved deli rotisserie chicken....I'm not feeling smoked honey ham lately), with a garlic-lime dijon. I toss sliced tomaters in there somewhere--and not those giant flavorless sh*ts from the supermarket! Pretty no? Do you enjoy my bite marks? You can use it for forensic evidence should I go missing. Or if I guess if I got kidnapped and then...bit...something and left it at the crime scene so u could determine who went missing (namely MOI), and...I was watching a lot of SVU and CI yesterday. and also alluding to Without a Trace. O.o

Thoughts:
Call it the semi socialist/people's party in me but I don't really like the idea of spending all that much money on food--to an extent! I will buy my Grana Padano, the nicer brie or gruyere, sometimes fontina, WHAEVER, and spring for the good Prosciutto (also fanplasmic substitute for ze sammich meats but just...less in quantity cuz it's so punch). I might pay highly for shoes and preferrably on superduper sale (but I also spent 80 bucks on a Rodnick gown that used to be $1500 @ the Barney's warehouse sale so THERE I am ze frugal!) , but in general I just think there's a price cap on things, including food. btw I also live in my Hane's Men's Premium cotton V-necks--3 foh 10 dollah! :) In the end...it's just food you're gonna crap out anyway (vulgar yes? mmm classy). Like expensive shampoo (but sometimes I do like my pricier products!), clothes etc etc b/c after a certain peak in price and value u just start to see that it is just plain cotton (or cotton jersey), just plain 80-90% water with 2ish % detergents (and they even add in a chemical for FOAMING!) that will just get washed down the drain. (Don't get me wrong, I'm still picky about shampoos & conditioners but u get my point).

My mom's birthday and both my brothers's bdays are in February.
I decided the only proper New York thing to do would be to ship home Jr's cheesecake.
Behold the wonder that is...the BIRTHDAY DEVIL's FOOD CHEESECAKE!! Most of the cheesecakes are $10 to ship (overnight) and $39.95. I can say from reports from back home that this cake was 1. delicious, 2. way too rich & decadent, and 3. I am the freakin' awesomemest daughter/sister for sending such a freakin' awesome cake. I might've added that last one.
Posted by obitran at 1:05 AM 1 comment: